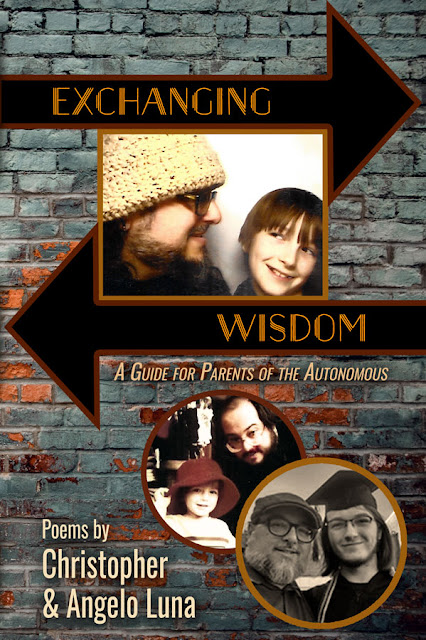 Re Exchanging Wisdom: A Guide for Parents of the Autonomous by Christopher Luna with Angelo Luna. Portland, OR: The Poetry Box, 2021.

From Exchanging Wisdom by Christopher Luna:

with the picture of

It was fun lookin' at Dizzy's cheeks.

This is Is, and you're listening to Astrology

Where is the car?

Where is your piano?

I think she gonna play some Dizzy.

Speaking of Diz, we're gonna send out a request to Angelo,

he's a three-year-old Dizzy Gillespie fan who called in.

So this one goes out to Angelo.

The waterfall on my meat. The basket still swinging.

Dizzy. Does it make your cheeks so big?

Does it make your cheeks so big?

Note: Astrology was a program on Portland's KBOO Radio (90.7 FM).

The following is excerpted from a letter I sent Chris Luna on February 15, 2022 concerning his new book, Exchanging Wisdom:

You’ve written another great book of poetry, w/Angelo’s help, of course, worthy to stand w/message from the vessel in a dream. It is clearly the work of the same principal author, clearly the travail of a major American Poet coming into his own, but simultaneously via the parenting concerns opens up a whole new dimension. Hopefully, in practice as well as theory, you’ve produced a book of poetry, which because of its insight into the parent-child relationship, could interest people who might normally not be interested in poetry?

I’m always happy to see “more than we can bear” sourced, & what could serve, along w/Angelo’s first poem, as a more appropriate Prelude? I was also happy to see “Angelo Discovers Dizzy,” which, of course, I remember fondly from On the Beam.

Exchanging Wisdom reads so easily, & it’s so much fun to read. Your naturally intuitive non-intuitive feints & moves work. That you can distill the essence, more or less, of Angelo’s first 21 years, and his growing up from your POV, more or less, in a 100-page book of poetry, is truly remarkable. You know there’s been so little it seems that’s been written about father-son relationships. It’s striking. I can only think of several books, all novels, and the theme is always written of the son’s POV about a domineering, if not downright abusive, father. I can’t even think of a book that a father wrote about his relationship w/his son! And a positive relationship at that!

Thanks for doing your part to bring Angelo in the world. Thank you for being such a great Dad under what I know were such great difficulties at times. Thank you for writing about it & sharing it w/the rest of us.

Favorite poem? Well, other than perhaps aforementioned “Angelo Discovers Dizzy,” I love them all; I think they all work well together. I’d say perhaps each piece is an integral part of the song cycle, at the same time each work stands on its own. To the extent that you edited yourself, and/or were edited by another or others, you have been well served.

Finally, in this regard, I can give you no higher praise than to inform you that I have placed Exchanging Wisdom: A Guide for Parents of the Autonomous on my superaltar along w/message from the vessel in a dream and Driven by Hope (by Toni Lumbrazo Luna) & the handful of other books I truly cherish more than any others in this world.

Note: for the record, among my most cherished books in the world are White Lipstick by Geri Digiorno, With Every Step I Take by Avotcja, Saturday Night at the Pahala Theatre by Lois-Ann Yamanaka, The Ape Woman Story by Nancy C. Harris and Street Theology by Michael Koch.

Posted by David Madgalene at 10:51 AM

David Madgalene
David is a writer living in Sonoma County. David has been collaborating with bassist Steve Shain for the past decade.